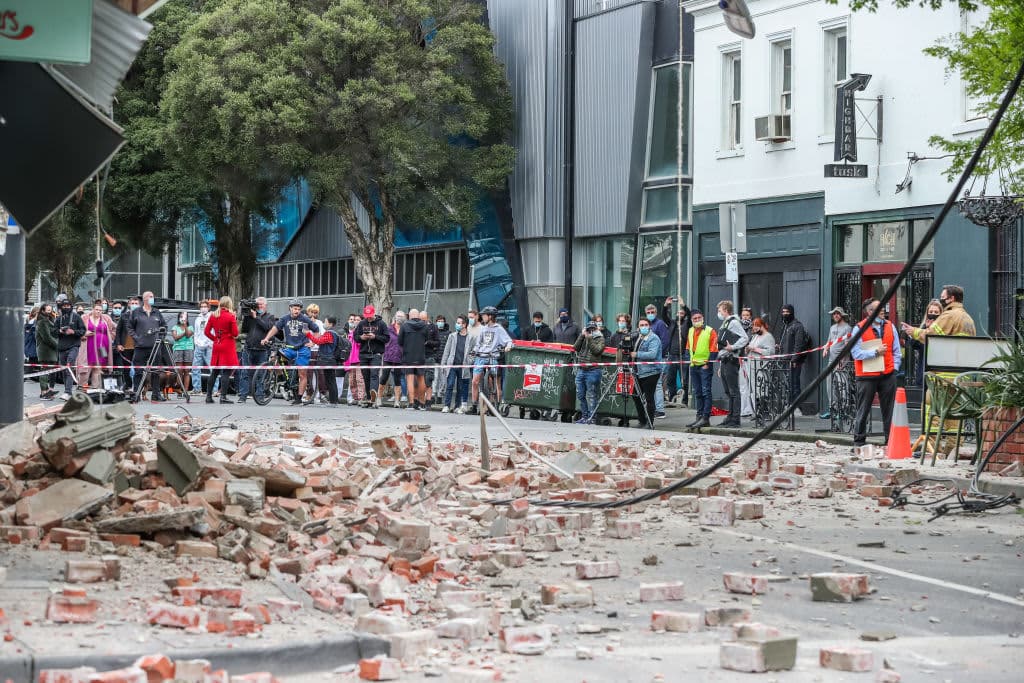 We seem to be living in a time when many biblical predictions are coming true. One of them is the increase in the number of and intensity of earthquakes. Consider this one from the Newser website on September 21, 2021:

(NEWSER) – A magnitude 5.8 to 6.0 earthquake caused damage in the city of Melbourne on Wednesday in an unusually powerful temblor for Australia, Geoscience Australia said. The quake hit northeast of Australia’s second-most populous city near the town of Mansfield at a depth of 6 miles, Geoscience Australia said. Media showed images of damage to brickwork in Chapel Street in the inner suburb of South Yarra, the AP reports. No injuries were reported. Victoria state police warned of possible aftershocks and told people to avoid driving. The quake was also felt in neighboring states South Australia and New South Wales, reports the BBC.

Dr Jannuka Attanayake at the University of Melbourne’s Earthquake Seismology Earth Sciences unit tells the Guardian that if preliminary estimates are correct, this is the strongest quake to hit the area in 200 years. “If it’s a magnitude 6.0, it’s the first in hundreds of years,” Attanayake says. “This is the first earthquake of this magnitude I have seen here during my lifetime, and it has probably not been seen during the lifetime of several generations.”

Once the dust settled and the magnitude was confirmed, the quake registered 5.9.

On a hunch, I searched for a list of recent severe earthquakes. I was not prepared for the findings!
I stopped counting when I realized 100 only slightly dented a list that easily showed well over 500 that were 4.0 or higher. Three of them were over 6.0, the highest 6.4. The frightening thing was that all of them had occurred within one month – the 30 days within August and September 22 when I am writing this article.

Granted, many of them were in areas where there would be no damage. Some were in open water where they may have been able to create a tsunami, but there were a large number that were in populated areas and caused serious property damage.

I have never had the experience of feeling the strange shaking of an earthquake, and if I never do, that will be just fine. Seeing the devastation they can cause and hearing the reports come back from a quake zone leaves a lasting impression. A large part of that impression is, it happens with little or no warning, there is nothing one can do to stop it, and within a minute everything one called home, business or even neighborhood is reduced to rubble.

Dr Attanayake said, “…this is the strongest quake to hit the area in 200 years.” This observation is not unique. Many recent ones have pushed the records for their strength.

In Isaiah 29:6 the prophet is warning Ariel, or Jerusalem, of a future day when Thou shalt be visited of the LORD of hosts with thunder, and with earthquake, and great noise, with storm and tempest, and the flame of devouring fire. A warning like that should strike fear into the heart of anyone.

In the time that leads up to the battle of Armageddon, still future, we read this in Revelation 16:16-18: And he gathered them together into a place called in the Hebrew tongue Armageddon. And the seventh angel poured out his vial into the air; and there came a great voice out of the temple of heaven, from the throne, saying, It is done. And there were voices, and thunders, and lightnings; and there was a great earthquake, such as was not since men were upon the earth, so mighty an earthquake, and so great.

Imagination cannot picture what kind of devastation this will involve. When the dust is all settled, we are talking about total devastation. God’s wrath will have been justified and satisfied with this quake. He will have had the last word and nothing will be left to remind one of the former position and power of this city.

In Revelation 18:18-20 we read more of this complete annihilation: And cried when they saw the smoke of her burning, saying, What city is like unto this great city! And they cast dust on their heads, and cried, weeping and wailing, saying, Alas, alas, that great city, wherein were made rich all that had ships in the sea by reason of her costliness! for in one hour is she made desolate. Rejoice over her, thou heaven, and ye holy apostles and prophets; for God hath avenged you on her.

There are many that believe this is speaking of New York City. If that is true, the United States is found in biblical prophecy, but not in a situation to be envied. “This great city” has been a thorn in God’s flesh and a stumbling block for humanity long enough and to a level that mercy is not available. It is probable that the list of offences against the city in focus will accelerate in number considerably during the 7-year period of the tribulation.

Sin is ultimately judged and when it is, it is ultimate judgment. Calamity is not something we normally find to be a good thing, but in this case, God goes so far as to command rejoicing from those who were wronged during their lives and ministries by the influence that was centered there.

Surely there will be a few notable people in this city who are in the middle of God’s bulls eye of judgment, but consider this: All of us are to stand in judgment before the righteous king of heaven when this life is over. The only thing that will matter then is who your Defense Attorney will be. You will either represent yourself or be represented by the King of Kings who will present the final argument: “My blood was shed for this person’s sins. He stands faultless before me in My righteousness.”

Who will represent you on that day?