The Lateness of The Hour 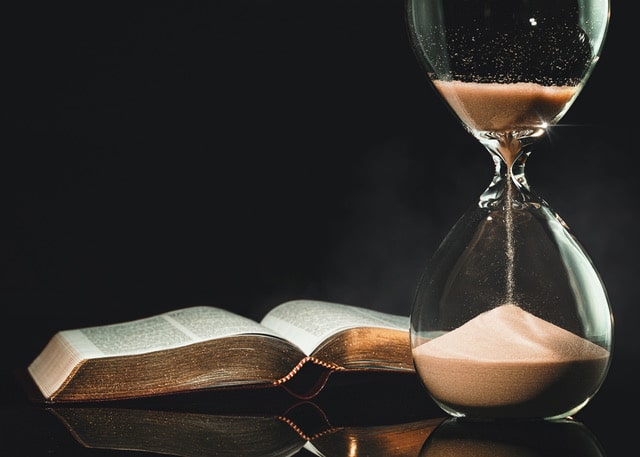 I wonder if you have been paying any attention to the things being done in the name of our government in recent days. At the risk of causing upset stomach, I would like to focus on some of what has been happening on today’s “Bible in the News”.

At this time, we have one who claims to be President of the United States but who is seeming to do everything he can to bring down our nation. Before you touch the dial, this is not going to be a political commentary. We need to focus on the lateness of the hour not only for our nation, but for the current era in which we live.

Everything seems to be falling apart. Who is in charge? What is the plan?

Did you ever consider that this might be the plan? Somewhere along the line, you surely were in a situation that seemed as if there was no up or down, no plan or purpose. You either kept with it until it found direction or you found the exit door. If nothing else, you learned a new definition for frustration.

Right now, there seems to be no plan to our national direction. We have become a bad joke among many of the nations of the world and our leaders seem to be scorned as they take afternoon naps.

Consider: the founding of our nation was a glorious event. Virtually every one of our founding fathers acknowledged Christ either as Savior or One whose leading was important. Gnashing his teeth during this time was one known as Satan. The last thing he wanted was a nation based on the Bible, so from the very beginning his efforts were tuned to a goal that seems now to being achieved.

A long list of events – large and small – could be compiled, but the current big issue is Corona Virus, and it will serve as the great example. I recognize that there are many viewpoints of what the reality of all of this is, so please forgive if this is not your personal view.

Of suspicious Chinese origin, we are confronted with a new disease that we are told has the potential of wiping out civilization worldwide. What a pleasant prospect! In a short period of time, it has engulfed the world with fear as we are told we don’t have a chance of survival without the magic vaccine. Never mind that there are two drugs that are already in the drug stores that can solve the problem for anyone stricken. They have a major problem, however. They are out of patent and extremely inexpensive to produce. That means they have no value to big pharma. Ignore them. Ban them. Move forward with a vaccine that has not been proven or tested enough to know what to expect, but which can garner large profits.

Once being used, it was quickly found that the new vaccine has major problems causing secondary issues that are huge compared to what they were supposed to cure. Serious conditions including death are being reported on a constant basis, but not by the normally watched or listened to major media. The statistical focus (without mentioning this key factor) is on those with compromised immune systems or other serious medical conditions. They obviously have the greatest risk and are the ones forming the list of seriously ill or dead. There are many more that are experiencing incredible and fast acting irreversible medical problems. Meanwhile, it is being learned that the average person with good health and a functioning immune system is almost sure to escape all concerns.

Why? For most of those who get it, it is little more than a case of a bad cold or flu. Funny, try to find statistics for flu in the past 18 months and you will find it difficult. It would appear that nearly all flu cases have been listed as COVID, making the statistics skewed heavily.

Let’s try to focus on the real issue here. There is a high probability that a very large portion of the world’s population will be killed by the vax within the next year or so, others will never be able to function normally again. Many are unknowingly being sterilized and will never be able to bear children. These are verifiable facts that major media will not report.

Now, let’s compare two major forces at work here, then tell me who you think is behind the vaccine.

Ultimately the Lord wins, but at a very high price.

A purpose much greater than ourselves

“Before I formed thee in the belly I knew thee; and before thou camest forth out of the womb I sanctified thee, and I ordained thee a prophet unto the

While on a recent trip to Japan, President Joe Biden said that America is “going through an incredible transition” to “be less reliant on fossil fuels.” Following Biden’s remarks, White