Are you bored with your Christian life? A recent poll by the Barna Research Group found that many people today are bored with the things of God. According to Barna, seven of ten people have dropped out of church in the past decade. Here are the top reasons the respondents gave for leaving church: Twenty percent say God is missing from church. Thirty-five percent say church is not personally relevant to them. Thirty-nine percent say church is not important because they can find God elsewhere. And an astounding forty-six percent find church boring.

Being bored with the things of God is nothing new. Over 2,400 years ago, the people in the time of the prophet Malachi were also bored with the things of God. We read in Malachi 1:13, “Ye said also, Behold, what a weariness is it! and ye have snuffed at it, saith the Lord of hosts …” The Bible says when it comes to worship, when it comes to church, when it comes to spiritual things, God’s people said, “It is weariness.” In other words, they were bored. They were so bored they “snuffed” at it. That means they “sneered” at worship. They turned their noses up at Almighty God.

Now, I understand all of us are spiritually at different levels and there are factors that influence our intimacy with God. Some of you are having the best days of your life, some are deep in mourning. Some trust the church, some have been deeply wounded by it. Some trust Jesus, and many don’t … and the list goes on and on. But understand, where you are spiritually affects your relationship with God. However, if you are bored with God, perhaps your problem is not with God. Could it be the problem is with your heart?

The people in Malachi’s time had an issue of the heart. Notice what the Bible says in the rest of Malachi 1:13, “Ye said also, Behold, what a weariness is it! and ye have snuffed at it, saith the Lord of hosts; and ye brought that which was torn, and the lame, and the sick; thus ye brought an offering: should I accept this of your hand? saith the Lord.” God’s people brought Him lame and sick offerings. Even though they promised to give God their best (Malachi 1:14), they brought offerings they didn’t want.

We live in a country where most of us are self-focused. We are number one. And it is true that we are number one ­— in narcissism. Research shows that Americans like to see ourselves as better than others. People in the United States are more self-centered than people in other countries. How can we give our best to God when we are so focused on ourselves? How can there be room for God in our life when we are so full of ourselves?

Several years ago, a young Christian man named Will decided to leave Bible college and instead focus on a career in business. Will thought he could do more for God in the corporate world. So, he went to college and received his degree in Business Administration. Then he got a job with a Fortune 500 company.

The years went by, and Will became a young and very successful executive. One day, Will was travelling down a suburban street in his brand-new, black Jaguar. Suddenly a brick was thrown from the sidewalk, thumping into the side of the car.

Will slammed on the brakes! He ground into reverse. The tires on the Jaguar spun quickly as he zoomed back to the spot from where the brick had been thrown.

Will jumped out, grabbed the kid who had thrown the brick, and pushed him up against a parked car. “What was that all about?!” he screamed. “That’s my new Jag, that brick you threw is going to cost you a lot of money!”

The young boy said, “Please, mister, please … I’m sorry! I didn’t know what else to do! I threw the brick because no one else would stop!” Tears were dripping down the boy’s chin as he pointed around the parked car. He said, “It’s my brother, mister. He rolled off the curb and fell out of his wheelchair and I can’t lift him up.” Crying, the boy asked Will, “Sir, would you please help me get him back into his wheelchair? He’s hurt and he’s too heavy for me.”

Will’s anger left him. The mood was transformed in a moment as Will realized what had happened. He lifted the young man into the wheelchair and took out his handkerchief and wiped the scrapes and cuts. He then watched as the younger brother pushed him down the sidewalk toward their home.

Will decided to never fix the dented side door of his Jaguar. He kept the dent to remind him not to go through life so fast that someone must throw a brick at him to get his attention.

Maybe you have become so spiritually bored that God has had to throw a brick at you to get your attention? Maybe Malachi’s message is the brick that God is throwing at you?

You can eliminate boredom in your Christian life by changing from the inside out. It starts with being honest about what is going on in your heart. Then look to God’s Word as a guide. Draw near to God and He will draw near to you. That’s the cure for boredom. In Jesus Name.

You can learn more about the prophet Malachi in James Collins’ new book The 12 available now from Beacon Street Press. 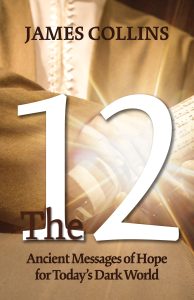 James Collins is the Staff Evangelist for Southwest Radio Ministries. He previously served in various pastoral positions in Kansas, Oklahoma, Illinois, and California. Before being called to SWRC, James was a Chaplain in the United States Army and served in Operation Enduring Freedom, Operation Iraqi Freedom, Operation New Dawn, and Operation Inherent Resolve. He and wife share their home with three extraordinary children, three dogs, and a lifetime collection of books.